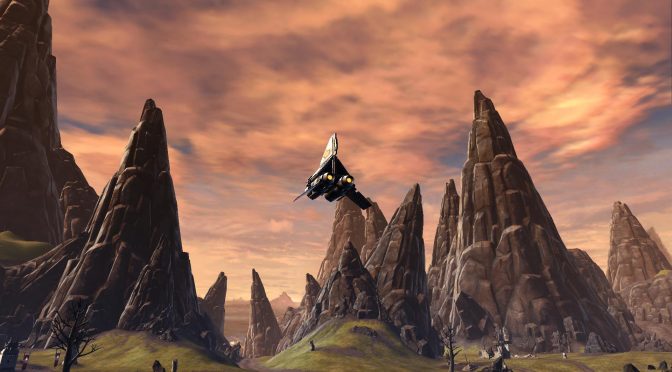 2018 began with my return to BioWare’s Star Wars: The Old Republic. While I had issues with the game when it first released in 2011, and while I still think it’s a buggy and clunky game, it does have some good qualities, namely: the storytelling, Force lightning, and lightsabers.

In returning to the game, I first focused on leveling my Sith Sorcerer to endgame, making her my first character to actually reach endgame. During vanilla, I quit before I ever made it to level 50. The current level cap is now 70 on account of the expansions over the years. Fortunately, leveling isn’t the chore it used to be. Class missions now give an enormous amount of experience enabling you to skip most other quests. Then, of course, there are the Legacy perks and subscriber XP boosts. Planets now scale you to their level, ensuring you’re earning XP no matter where you are in the galaxy.

Additionally, the game has had many quality of life improvements since it first released. The Legacy system of 2012 was a great improvement, but what I’m particularly loving now is the mission terminal which not only has all the heroic quests, but also shuttle passes directly to them. The XP is incredible, and the gear you get for completing those heroics is for your actual level, not scaled-down level, which makes gearing to level 50 unproblematic. As a result, I’m currently leveling ALL advanced classes.

Flashpoints (aka dungeons) now have a story mode which you can solo with a companion and with the assistance of an amazing battle droid which is easily the best tank ever. Consequently, I’ve been able to play through various operations by myself, fully enjoying the story without having to spacebar through cut scenes, and to explore every nook and cranny of the flashpoint map while getting those bonus missions done.

This forthcoming story, this planned series of posts, is about leveling my all-new Sith Warrior. While I love my Sith Sorceress, sometimes I just want to battle with a lightsaber, and the Sith Warrior easily fulfills that.

With Legacy perks, an obsessive-compulsive desire to complete EVERY quest, and a recent bonus XP week to coincide with game update 5.7, I managed to reach level 45 before ever finishing the Prologue and leaving Dromund Kaas. At level 59, I was ready to leave Balmorra, but I continued on with that planet’s bonus series and was level 62 before I ever touched down on Nar Shaddaa.

Currently, I’m questing, advancing the story, and tracking down datacrons on Nar Shaddaa.